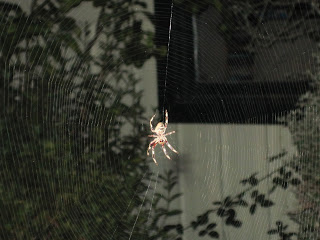 Every summer for the last few years we've had a visitor turn up for in the garden for several months.  I thought perhaps this year it was too hot, too wet... (secretly hoping too-anything!) for our visitor to reappear.  But two nights ago the visitor, or at least a descendant of the previous visitor, came back.

I hate spiders, but even I have to admit that orb weavers are pretty amazing creatures.  Their behaviour is fascinating.  Each night they shoot out a long, incredibly strong single web across the garden, and then quickly get to work to create a huge perfect oval web that they sit in the middle of for the night, to catch dinner.  By morning it is all gone except the original line across the garden, and they sit quietly under a leaf until night falls, when they do it all again.   Last year we watched our visitor for what must have been at least three months, as her webs got bigger and bigger, along with her own girth, capturing food and then a mate.  Then after a storm one night, that was it, she was gone, I was almost sad.

This would all be fine except that each year the spiders build their little empire in the same spot, from the Crepe Myrtle tree down to the outdoor table, which also happens to be right across the garden, and completely blocking access to our studio.  So for several months each summer we know that we can't get into the studio at night without ending up caught in that intricate web.  When the latest arrival turned up two nights ago, she build a small, tentative web neatly tucked into the garden below the tree, and I was hopeful that this year might be different, but last night, as soon as night fell, out she went and somehow managed to get the initial web across past the table and onto the sun umbrella, cutting off even more garden.  At this rate, by the end of summer we won't be able to get out the back door!

One of the benefits of gardening is that you become much more aware of what is going on around you in nature.  The change of seasons; the response of plants to water and sunlight and warmth; and the insects that inhabit the garden.  This year I started to notice the ecosystem that seems to be in play in the city garden.  There were some aphids on the apple trees early on in the season, but then some ladybirds and small native birds arrived to munch them, and the problem was solved.  I'm hoping that our summer visitor will play her part in the garden, and reward our hospitality by eating lots of bugs that would otherwise be eating my dinner!
Posted by city garden country garden

city garden country garden
The City Garden Country Garden blog sets out to chart my experiences growing as much produce as possible between my own tiny city garden and the big country kitchen garden that I play in, as well as my learnings along the way about permaculture, delicious healthy food and sustainability. I also get occasionally distracted by sailing in beautiful timber boats! I hope you enjoy reading it. I'd love to hear your comments and have you follow to come along on the adventure with me.

All content on this blog is Copyright (c). Please do not use images or text without requesting and receiving permission first via my email address below. Thanks!